In 1946 Joseph Dudek, a Polish immigrant, and Stanley Bock formed Dudek & Bock Spring Mfg. Co. By working together, their mere $5,000.00 and two 4-slide machines launched them into manufacturing wire products in a small store front on Damen Avenue in Chicago, IL.

The early customers of Joe Dudek and Stan Bock were Dormeyer, VM Corporation, Whirlpool Corporation (formerly the 1900 Corp.) and Bendix. These customers were so pleased with the quality of their products that volume doubled and redoubled each month. Dudek and Bock was able to attract large merchants because of Joe Dudek’s unique talents in manufacturing. His machines produced problem-solving wire forms such that one wire component was often able to replace and out perform many conventional parts. This also reduced the cost of assembly. 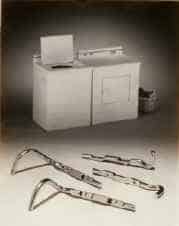 In 1948 Joe Dudek and Stan Bock purchased a larger building on Fulton Street. Within a year they added a second level to the facility. Profitability continued, guided by Joe Dudek’s engineering and business genius and Stan Bock’s financial acumen.

In 1954 DUDEK & Bock Spring Mfg. Co. moved to a new 50,000 sq. ft. location on Grand and Pulaski. This facility was larger than they thought would ever be necessary. Fortune 500 companies such as Kelsey Hayes, Tecumseh, General Electric and most of the General Motors Divisions were now included in the customer base. Automatic manufacturing of brake return springs and a complete line of coiling and punch press services complimented their original 4-slide endeavor. 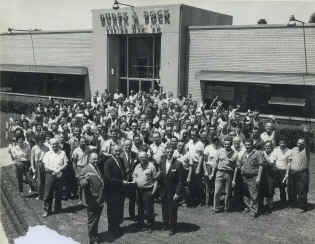 1954 also saw the acquisition of Advance Spring Corporation (one of Chicago’s oldest spring companies.) A 30,000 sq. ft. addition to the Grand and Pulaski factory enabled DUDEK & Bock to continue its reputation of quality, low cost products and on-time delivery.

Within two years a 20,000 sq. ft. mezzanine was built. Still in the late 1960’s the usable area of over l00,000 sq. ft. was badly overcrowded by almost 300 employees. Stanley Bock retired, sold his interest in the business and Joseph Dudek assumed the stewardship alone.  The decade ended with the volume in sales exceeding $7 million – a very significant figure for this era.

In 1970 the modern 173,000 sq. ft. facility was tripled in capacity with relocation to the current headquarters at 5100 W. Roosevelt Rd., Chicago, IL. The total manufacturing space is now 327,000 sq. ft. Financial experts expressed admiration and even amazement at DUDEK & Bock’s achievements during the Country’s difficult economic environment. It is unusual, they said, for a company to acquire another facility with very little outside financial assistance.

Thanks to Joseph Dudek’s leadership, DUDEK & Bock Spring Mfg. Co. is filled with an enormous amount of history, dedicated and loyal employees, satisfied customers, and millions of dollars worth of equipment.