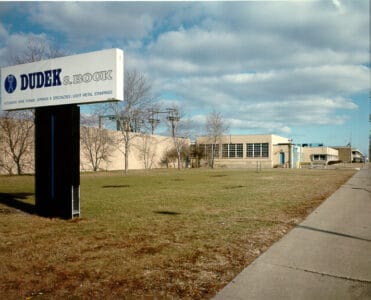 We refer to Dudek & Bock as a family business. So many families have contributed to the success of the company. The business that began in 1946 with only a few employees has employed thousands of people over the past 75 years. From the original location in a storefront on Damen Avenue, the company moved, in 1948, to a larger building on Fulton Street. In 1954, Dudek & Bock moved to a 50,000 square foot location on Grand and Pulaski. Needing more space, in 1970, the business moved again to 5100 W. Roosevelt. None of our current employees have worked anywhere other than our current location.

We will try to trace some of the familial relationships of our current employees. Sometimes it feels as though one needs an organizational chart AND family trees to understand the company. (In the listings below the dates in parentheses refer to dates of employment.)

When we think of the families who currently work for Dudek & Bock, it may be more appropriate to refer to some of them as clans given the number of inter-related employees.

Murillo: Rafael, Brake Spring (2013-present), was the first to come to the U.S. from Guanajuato. He was followed by his brother Jose, Automatic/Brake Spring (1984-present). Their nephew, Ernesto (2010-present), works in Rear Pack. Ernesto is married to another D&B employee, Juana Garcia, Load Test (2015-present).

Nguyen/Thach: Nguyen is the most common surname in Vietnam (40% of Vietnamese are Nguyens). We currently have six employees with the last name Nguyen, but not all of them are related. Patriarch of the Nguyen clan was Hai Ngoc Nguyen, 4-Slide (1988-2020), who retired during the early days of the COVID pandemic. Hai’s nephew, Dung Nguyen, 4-Slide (1996-present), has taken over from his uncle in recruiting new employees to Dudek & Bock. Two nephews work in 4-Slide as well: Phong Nguyen (2017-present) and Ranh Le (2012-present). Hieu Thach is Dung Nguyen’s uncle. Hieu (1986-present minus about a year) retired once and rejoined the company. Hieu’s wife, Be Ha, Load Test (1996-present), and his nephew, Dung Thach, 4-Slide (2012-present) also work here. All are on 2nd Shift.

Solis: We learned that many of our employees came from the Mexican state of Guanajuato. Among them are the Solis brothers: Martin, Brake Spring (1976-present); Mario, Automatic (1978-present); and Gerardo, Tool Room (1980-present). At one time, another brother, Carlos, worked here, as well as their sister, Guadalupe Sanchez, and her husband Andres Sanchez. The Solis brothers are related to the next family, the Sotos.

Zuniga: The Zunigas come from the state of Jalisco, where they grew up on a farm. Victor, Tool Room (1981-present) was the first to come to Dudek & Bock, followed by his brothers: Marcos, Automatic (1981-present), and Salvador (1988-2018). Victor and Marcos also happen to be married to sisters from Puerto Rico. Georgina, Automatic (2010-present) is Salvador’s wife. Marcos’ son, Marcos Jr. (2014-present), also works in Automatic. Other family members who were employees at Dudek & Bock are Lourdes Zuniga, Customer Service (2010-2017), who is Marcos’ daughter-in-law, and Kevin Zuniga, Shipping (2018), Georgina and Salvador’s son.

In addition to those mentioned above, we have: