Joseph Dudek left Poland in 1930. He never saw his parents again. The Great Depression . . . World War II . . . it wasn’t until 1966 that he returned to Poland with his wife and two of his children, Pat and John. John writes about his memories of that trip: 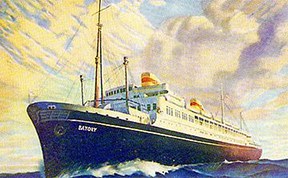 I was about 10 years old when my parents took me and my sister Pat on a trip to Poland. For my parents it was their first return to their homeland since they arrived in the U.S. some 30 years ago. We sailed across the Atlantic on the Polish liner the Batory. We had to depart from the port in Montreal because the U.S. would not allow communist ships in. It was a nine-day trip to cross the ocean, so as a 10-year-old I was in my glory with the adventure! Even got to see an iceberg! 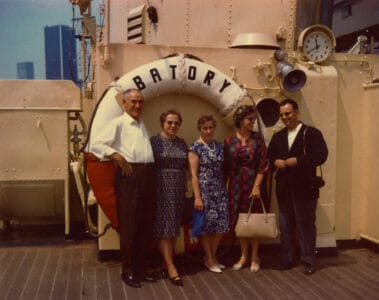 A quick sidebar: One evening, bored to death while my parents and sister were enjoying a relaxing dinner, I asked if I could go out on the deck. While the atmosphere in the dining room was calm and musical, outside there was a wild storm going on! Hanging onto the railing while the rain and wind blew in my face made me feel like a real sailor! Young and full of adventure, with no sense of danger, I thought it would be cool to climb the crows nest. Well, luckily I suppose, I got caught and yelled at, in Polish, by this sailor so I made it up only a few steps. I ran away so I didn’t get in trouble with my parents.

There are so many great memories from that trip that I’ll never forget, but the one that made the biggest lifetime impact on me was the excursion to my Dad’s village, Szezyny. There were no roads into the village so we rode in this wooden wagon pulled by a single horse. I remember feeling sorry for the horse. The dirt path to the village was so worn and the wheel ruts so deep that the carriage of the wagon barely cleared the middle ground. We came to a slope and the driver had to latch a rope to one of the wheels and tie it to the wagon so it would drag instead of rolling and act as a brake to help the horse to keep the wagon from gaining too much speed. As we entered the village all the residents turned out to greet us. I thought that was kind of strange but later found out that several years prior my Dad had bought electricity service and arranged for it to be poled into the village. It turned out he was quite the celebrity!

My father still had his oldest sister, Honka (Anna), living in the original house and somehow they made enough room for us to stay a couple nights. The house was very small, maybe three or four rooms, thatched roof, dirt floors, straw mattress (which I found out I was allergic to because I had a hard time breathing that night), and a wood burning stove with which I remember Honka cooking up a big pot of maslanka (sour milk). No running water, the well was about 50 yards from the house, and I got the privilege to draw and carry two buckets of water, each hanging from a wooden yoke balanced across my shoulders. 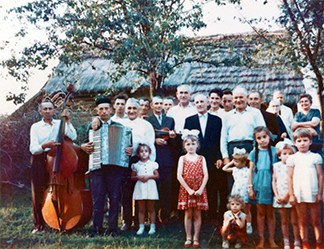 That night they threw a big party – food, bonfire, violins and accordions playing late into the night, maybe morning. Dad didn’t feel too well the next day. 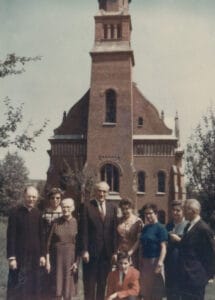 There was a chapel in the village with an altar that my Dad, as a young carpenter apprentice, helped build. We visited the village cemetery up on a small hill where my Dad said prayers over the gravesites of his parents. I remember my Mom saying to me that this was the first time Dad was able to visit his parents since he left when he was 20 years old.

He would tell us stories about growing up in the village; the farm he lived on was about an acre in size and they had the usual livestock and grew vegetables – mostly potatoes. Every harvest was a challenge. His mom would take special care carving out the eyes of the potatoes to make sure they had enough seed for next year’s crop and enough potatoes to provide food until the next harvest. During World War I his sister would collect the boots off the fallen soldiers to sell in town. There was a small forest that his dad kept extremely clean. Every piece of wood or fallen branch would be needed for firewood – their only source of heat for the winter. When his father decided to cut down a tree he would spend days digging out the root system to save for firewood. Nothing was wasted.

He remembered a time when a single father living in the village was struggling to raise his children and his Dad made them rabbit fur boots. In the winter time, my Dad’s Mom would put a brick in the stove and then wrap it with a towel to put under the blankets to keep warm when the fire went out during the night. Sometimes my Dad would sleep in the barn and dig a cave in the hay pile. He said he would wake up in the morning with icicles hanging over the opening from the moisture of his breath and body heat.

We left Szezyny with jars of honey and bottles of syrupy raspberry juice called Sok. I’ll never forget the humble beginnings that defines the heritage that Dudek & Bock was built on.