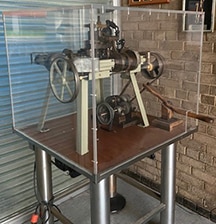 When Joseph Dudek came to the United States, he worked for his brother William’s business for 16 years. The William Dudek Company got its start making simple wire-forms, including paperclips and Christmas ornament hangers. The company also produced some of the toys that were included in Cracker Jack boxes. The molasses caramel corn with peanuts became popular after being offered for sale at the 1893 Chicago Columbian Exposition. In 1912, the Cracker Jack Company began putting small toys in every box. The toys were often made of metal, until World War II, when metal was needed for the war effort. From that time on, the toys were usually plastic or paper. After her marriage to Joseph, Angeline Dudek helped in the business by assembling Cracker Jack puzzles.

Joseph Dudek was very mechanically gifted, but did not have any experience with 4-Slide machines until he joined brother William’s business. He learned the technology so well that he built several “baby” 4-Slide machines, one of which is displayed in the Dudek & Bock lobby. Two of those baby 4-slides were installed in Joseph and Angeline’s basement in their house on Hirsch Street. The 4-slides ran during the night, and Joseph said the sound lulled him to sleep. If something went wrong, it would wake him up and he would get up to fix the problem. In the morning he would put a fresh coil of wire on the carrier and go to work, leaving Angeline to keep an eye on the machines. Joe told her to just shut the machine off if something went wrong, and he would fix it when he came home for lunch.