Have you ever thought about the name of the company, and wondered for whom it is named? Dudek family members still work for Dudek & Bock, but who was Bock?

Stanley Bock was born in 1909. His name was originally Stanley Damian Buczkowski. His father, Damian, was from Russia, and his mother, Martha, was born in Germany. Through the 1930 census, Stanley was still living with his parents and three siblings in Chicago. Stan married Lillian Kielczynski in 1933. By the time of the 1940 census, he had changed his name to Stanley Bock and he and Lillian were living in Cicero at 1913 55th Court. His occupation was listed as Cashier at the Union League Club. At that time the Bocks had no children, although they later had three kids: Alan, Philip, and Adrienne.

In 1940, Joseph and Angeline Dudek were living 9 miles away at 1929 Wolcott Avenue in Chicago. By that time, they had two children: Theresa, age 4, and Walter, 3. Toward the end of World War II, Joseph Dudek made plans to start his own wire-forming business. When his brother William died in 1945, Joseph agreed to stay on for another year to help his nephew, Fred Dudek, who took over the William Dudek Manufacturing Co.

Joseph was looking for a partner for his new business. A poker buddy mentioned that his sister was married to a sharp young man named Stanley Bock. Joe and Stan met and agreed to enter into a partnership. They had skills that complemented one another. Stan was American born, working on a college degree at night, and had experience in finance. Joe had the technical knowledge and experience in manufacturing. However, neither had easy access to money to start the business.

Joseph and Angeline had moved from Wolcott Avenue to 3245 Hirsch Street in the Humboldt Park neighborhood. The Hirsch Street house was a one-story home with a basement. In the front of the basement was a small apartment consisting of bedroom, bathroom, cooking area with a stove and sink, and a tiny sitting area. In the rear portion was a coal burning furnace, a work bench, and a laundry area with a ringer washer and room to hang laundry. Also occupying the back area were the two baby 4-slide machines.

To raise money to start the business, Joe Dudek sold the house on Hirsch Street to Frank and Anne Foreman. (Anne was a cousin of Angeline Dudek). The Foremans lived in the basement apartment and rented the rest of the house back to the Dudeks. The baby 4-Slides were moved to the garage, which was still owned by the Dudeks. Eventually, with $5,000 and two 4-Slide machines, Joe and Stan opened their business in a small storefront on Damen Avenue on September 4, 1946.

Joseph was late for his first day of work. Mr. Bock was waiting outside with the few employees. Joe Dudek had the only key, but had to drop off Theresa and Walter at school and to take Angeline to the hospital for the birth of their third child, Patricia. Leaving Angie at the hospital awaiting the birth, Joe went to work.

Stanley Bock (Front row left) is shown below with his partner, Joseph Dudek (Front row, fourth from left), and their employees. The photo shows a profit-sharing distribution, probably in the 1950s. 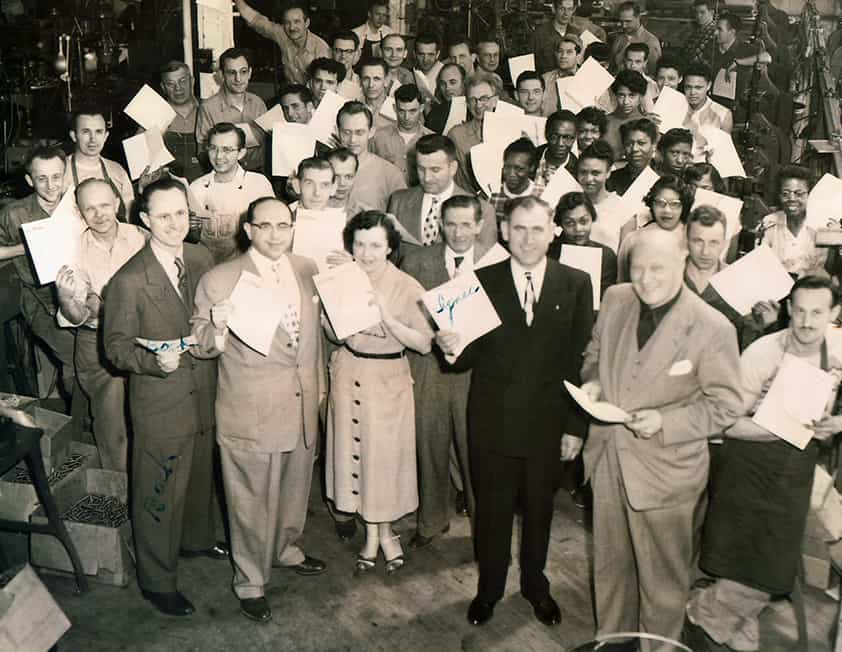 The partners clashed in the 1960s over spending issues, leading Stan Bock to retire and sell his interest in the company to Joseph. Stanley Bock died in March of 1996 at the age of 87.